Injuries happen to millions of people every day; however, some can be worse than others. Concussions are serious head injuries that can affect the body in numerous ways. Some known symptoms include significant headaches, confusion, dizziness, vomiting, and in some cases slurred speech (Mayo Clinic Staff 2019). The brain is how we move, see, speak, think, and communicate, in other words, it is very important to life.

The association between concussions and musculoskeletal injuries has been analyzed for many years. One study back in 2015 particularly focused on former NFL players and their background medical histories. The researchers found a clear association in those players that reported a concussion and a knee or ankle injury shortly after (Pietrosimone et al. 2015); therefore, they had enough evidence to say that there is some type of relationship between concussions and a lower extremity injury in athletes. In 2017, another study found that “after [a] concussion, collegiate football players exhibited greater alterations in stiffness across the lower extremity when compared with uninjured controls” (Dubose et al. 2017).  In other words, this subsequent stiffness can cause later complications and further injuries in athletes. Both of these studies suggest a correlation between concussions and consequential effects in the lower extremity of the body. Daniel Herman and his collogues strive to determine if, “athletes have an increased risk of lower extremity musculoskeletal injury after return to play from a concussion” (Herman et al. 2017). To collect their data, they worked closely with the University of Florida and its physical therapy, orthopedics and sport’s medicine departments.

The experimenters hypothesized that athletes suffering a concussion are more susceptible to an injury to the lower extremity of their body in the first ninety days of recovery compared to those athletes of the same sport, who do not have a concussion (Herman et al. 2017).  When referencing a lower extremity injury, the journal is suggesting future injuries such as ankle sprains, ACL tears, hamstring strains, and foot sprains. Scientists study relationships similar to this one in order to keep athletes safe and healthy. This is just the beginning to understanding concussions and their possible consequences.

The authors gathered their data through an “observational historical cohort study” (Herman et al. 2017). To clarify, researchers looked at their test subject’s past medical records to get an idea of their former injuries and concussions. The study included Fifty-two males and twenty-one females for a total of seventy-three collegiate athletes. Some of the specific sports they studied were “men’s football … women’s basketball, soccer and lacrosse at a National Collegiate Athletic Association Division I university” (Herman et al. 2017). The study included two different groups for comparison; the exposed-athletes, those diagnosed with a concussion, and the non-exposed athletes, those that did not have a concussion. The data also depended on whether the athlete was a starter or what the study referred to as a reserve. The researchers included two separate test groups because starter athletes were exposed to higher level risk, and they wanted to eliminate any future confounding variables. These examinees were followed for ninety days. Over this time period, the investigators recorded their test subjects’ age, gender, sport and position, whether they were a starter or reserve, if they had any musculoskeletal injuries, and if so, how many days they were forced to refrain from physical activity (Herman et al. 2017). Finally, the experimenters designed a table to effectively communicate these results, which are shown below. Using a chi-squared test, the researchers proceeded to compare the exposed-athletes to the non-exposed athletes to look for any type of association. Chi-squared tests are critical because they can test whether data is due to chance or whether a hypothesis can be supported. 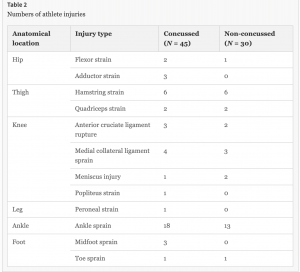 This graph shows the reported injuries between a concussed and non-concussed athlete.

As there is a growing popularity and competition in contact sports, concussions are happening more than ever. In the United States alone there are approximately 3.8 million sports-related concussions in just one year. (Dubose et al. 2017; Langlois et al. 2006). This can affect parents, coaches, trainers, athletes, and even the typical American. Another leading cause of concussions, aside from contact sports, are falls and car accidents (Cleveland Clinic 2015).  In other words, concussions can happen in any daily activity, so it is essential for the average person to become more aware of their potential risks and side effects.

The authors of this study did admit to multiple limitations and if changed, could lead to a stronger account. First, they commented that they only considered one university, which could make it difficult to generalize to the entire population. A larger sample size is needed for next time. The authors also expressed concern about the length of examination; they communicated that the “window of susceptibility” could go beyond the first ninety days. They also suggested that there could have been a potential confounding variable with previous injuries, and they needed to have prefaced stronger boundaries considering this condition. Overall, if these researchers were to repeat this study, they would make some adjustments to make it even more reliable.  Some solutions that could improve this study would be to include more test subjects, in this case, collegiate athletes at a variety of Universities, and an even longer trial.

Some of the compelling data that the researchers found was that males were 3.72 times more likely to injure an ankle, or knee, after being pre-exposed to a concussion. Along with females who were 2.75 times more likely to receive a musculoskeletal injury in the lower extremity of their body after a head injury (Herman et al. 2017).  This specific study wanted to keep gender separate from one another, however, they found convincing data for both men and women. At the end of the study, the researchers were able to support their initial hypothesis stating that they had “statistically significant odds of 3.39 for sustaining a lower musculoskeletal injury” (Herman et al. 2017) in those athletes who were concussed. This suggests that there is some kind of relationship between a head trauma and a later injury to the lower extremity of the body. More importantly, the brain is a vital organ, and it can have several later effects on the rest of the body. This clinical journal would influence future Universities to administer guidelines that help ease the athlete back onto the playing field. This research suggests that there is a length of time that athletes are more prone to serious injuries. After a concussion, it is best for athletes to refrain from any strenuous activity for a couple months to ensure ideal healing. To many people, concussions are still a mystery.

A multitude of journals has produced data similar to this one. Throughout the next decade, there will be many more ground-breaking studies that will help tie all of these research studies together; therefore, revealing even more knowledge about concussions and their effects on the human body. As these results are populated, institutions and Universities will provide new protocols that will help keep athletes safer, and hopefully eliminate the higher risk of future injuries.