With our final Feeder assignment for this unit close to finished, the class moved towards a more specific focus on what kind of form our final product, a popular article reporting the results of a recent scientific study, should take.

Over the weekend, one of our assignments was to finish viewing a show by Last Week Tonight about how popular new outlets reported scientific findings. The results of scientific research are nuanced and complicated, but often times, these findings don’t translate well to an exciting article title that entices readership or generates revenue. As a result, popular articles that report research findings can often be reductive or even miss the point entirely. Our class on Tuesday, therefore, began with a follow-up on the previous week. We considered the message of the show and discussed our own takeaways from this online expose; concluding, overall, that the way research is discussed and reported has a huge impact on the message that it sends. 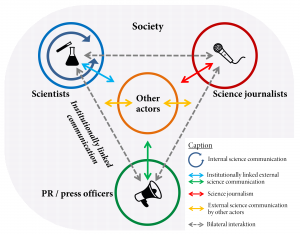 I think it was pretty serendipitous that we ended up discussing the video prior to the course content of this week, as it really emphasized how integral accurately representing scientific findings is when communicating science. This focus on accurate representation is what influences a lot of the forms that scientific discourse takes and so it was a good reminder to have as we went over the various structures found in scholarly discourse, especially when contrasted with how narrative discourse was structured. We also had time in class to discuss how we, as readers of scientific studies, could evaluate their findings. I think this was a good exercise to illustrate how a good study might generally look like and what things might be missing from less trustworthy sources. Additionally, I think that the exercise helped me realize that scientific discourse was not entirely about composing content, but also about giving feedback on the content produced by others. For example, the peer review process is a sort of feedback on the findings and methods of the paper, and good research will have methods that are designed with replicability, and thus feedback, in mind. In retrospect, the idea feels somewhat obvious. However, I think that it isn’t as clear when only reading papers themselves, which are dense enough as is.

By the time Thursday morning came around, we were completely finished with our Feeder assignments for this unit. That means all that’s left is the Unit project. In preparation for writing our own popular science articles, we went over some genre models. Each group was assigned a science article. The article my group looked at was about vaping, and its correlation with higher rates of quitting smoking. We identified various patterns across all four articles, such as listing possible conflicts of interests, explaining the methods of the study, and explaining the impact of the study on the reader. This was definitely not the first time anyone has seen a science article, but I think that it was helpful to outline and specify what elements in the articles presented relevant information to the audience.

Altogether, I think this week was a good culmination of what we have learned and discussed so far about scientific writing. I hope I can effectively apply what I have learned so far on my unit project.